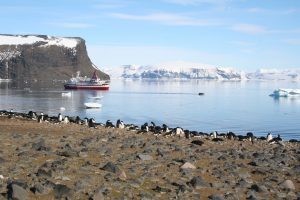 Ukraina whose presence in Antarctica is dated 1995-1996, has followed the 6Ø ATS (AntarcticTreaty Signature) celebration,  by putting  a Special Event Station on the air.

EM6ØKTS is active from Rivne, Ukraine, since July 1st  and will continue the activity till  December  31st, 2021.

On July 3, 1992, President of Ukraine, Leonid Kravchuk issued a decree on Ukraine’s participation in Antarctic research. In August 1992, the Verkhovna Rada approved the documents on Ukraine’s accession to the Antarctic Treaty, and on October 26, 1993, the Center for Antarctic Studies (later the Ukrainian Antarctic Center) was established, headed by Petro Gozhyk.

On July 20, 1995, in London, Ambassador of Ukraine Serhiy V. Komisarenko signed an intergovernmental agreement, and Petro Gozhyk, Director of the CAD, signed a Memorandum between the CAD and the BAS on the transfer of the Faraday Antarctic Station to Ukraine no later than March 31, 1996.

Stations from  different Countries are joining the  6Øth Anniversary of the Antarctic Treaty Signature. Some of them are already on air, others are going to come  from October 1st till December31st