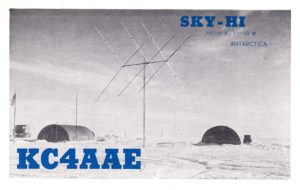 WAP must thanks immensely our friend Olivier Dymala F6EPN, for his kind help in finding several interesting and unknown  details of the past Ham Radio activity. This time our attention is focused on a 61 years old QSL card: KC4AAE operated at Sky-Hi Camp 75° 15’ South, 77°10’ West  in a short window (Dec. 1961-Febr.1962).

A clear description on the rear side of KC4AAE card, says:

The Sky-Hi Station was constructed by five civilians: Floyd Johnson, Gordon Angus, Pat Caywood, Chuck Nuner and Steve Barnes. After we put a roof of a fashion over our heads, we constructed the ionosphere and magnetic buildings, installed the scientific equipment and finally set up the ham rig (no doubt many hams feel this should have been in reverse order!) Because this is a remote QTH (650 miles from Byrd, 1300 miles from McMurdo) it is probable that this immediate area had not been visited previously. 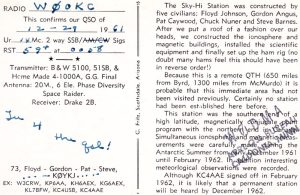 Certainly no station had been established here before. This station was the southern end of a high latitude, magnetically conjugate point program with the Northern end in Canada. Simultaneous  ionospheric and magnetic measurements were carefully made during the Antarctic Summer from early December 1961 until February 1962. In addition, interesting meteorological observations were recorded.

Eights Station  derives his name  from the United States Antarctic Research Program (USARP) project Sky-Hi, in which Camp Sky-Hi (later designated Eight Station) set up in Ellsworth Land in November 1961 as a conjugate point station to carry on simultaneous measurements of the earth’s magnetic field and of the ionosphere.

Eights Station (WAP USA-Ø7) was established  as permanent exploration base from January 1963 to November 1965,in what was the Sky –Hi Camp  located on Ellsworth Land about 1100 km from Byrd Station (WAP USA-19) and 2400 km from McMurdo (WAP USA-22) The station consisted of 11 prefabricated buildings that were brought in via planes and located on the site of the former “Sky-Hi” airlift project temporary scientific camp. The station was named for James Eights who was the first American Naturalist who visited Antarctica at the beginning of the 19th Century. The station was initially supported by 6 scientists and 5 Armed Forces attendants and included observations on meteorology, the ionosphere, geomagnetism, aurora and radio waves. At its peak, Eights Station hosted 27 personnel,  including individuals from the U.S. Antarctic Research Program Summer Party