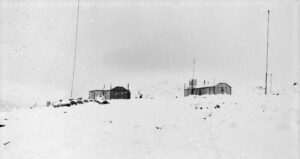 Starting October 15, 1956, the Soviet Union built a Scientific Station by the name of Oazis (Оазис) at the shore of the Algae (Figurnoje) Lake in the center of Bunger Lakes or Bunger Oasis’s area.  The Oazis Base located at 66° 16′ 29″ South, 100° 44′ 49″ East, consisting of two wooden houses ca. 20 m2 each and a few smaller buildings, was able to accommodate  eight people. The station was handed over by the Soviet Accademy of Sciences to Poland on January 23, 1959, and was renamed Antoni  B. Dobrowolski Station. It continued to be occupied for a few weeks only thereafter. 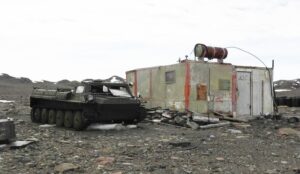 The still in place magnetic observatory building (“Oasis Station Observatory”), along with a plaque commemorating the establishment of Oasis Station in 1956, has been designated a Historic Site or Monument (HSM 10) following a proposal by Russia to the Antarctic Treaty Consultative Meeting (ATCM).