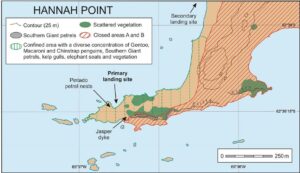 Station “P” was a British base camp at the head of Mateev Cove on the east side of Hannah Point, 62°39’16”South, 60°36’48” West on Livingston Island in the South Shetland Islands, Antarctica that supported survey, geology and biology field work, from 29 December 1957 until 15 March 1958. It was a temporary, mobile camp for use by field parties on Livingston Island. It has not been the practice to assign letters to field camps, so the letter “P” was used as the intention had been to erect a Hut. RRS Shackleton was holed when transporting the Hut, parts of which were used to repair the ship.

The Camp was occupied by a six-member team led by Hugh Simpson.

Hannah Point (the Point) is a narrow peninsula undulating upward to knife-edged ridges and vertical cliff edges 30-50 metres above sea level. There is loose scree on higher slopes and ridges, evidence of rock falls, and a Jaspar mineral vein. Ash-covered slopes link the Point to the flat open beach area of Walker Bay. (Pic aside show Hannah Point landing beach)