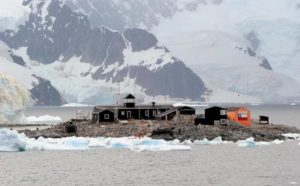 Chile’s Gonzales Videla Antarctic Base (WAP CHL-Ø6) is located at Waterboat Point, the low westernmost termination of the peninsula between Paradise Harbot and Andvoy Bay on the west coast of Graham Land. This feature has “island” characteristics, but it is only separated from the mainland at high water and it’s more usefully described as a “point”.

Now there is a Refuge, maybe more than one in the vicinity, but there is a bit of confusion about its name. WAP did try to have an help on this matter by the Chileam Antarctic Institute, INACH – Instituto Antártico Chileno but so far nothing is comng.

Going back to the name of this or these refuges or shelters we found:

Paradise Harbor shelter erected in 1950 near the Chilean base “Gabriel Gonzalez Videla” to honor Gabriel Gonzalez Videla, the first head of state to visit the Antarctic. The shelter is a representative example of pre-IGY activity and constitutes an important national commemoration. 64° 49′ 00 ″ South,  62° 51′ 00 ″ West.

Evidently,  Gabriel González Videla Refuge and Paradise Harbor shelter  are the same  site with two different names.  They are not yet listed on WAP-WADA Directory.

Another one, not listed on WAP-WADA Directory,  is  Refuge Casa de Botes (aka Waterboat Point Hut)

The coast in this vicinity was first roughly surveyed by the Belgian Antarctic Expedition in 1898. The point was surveyed and given its name by Thomas W. Bagshawe and Maxime C. Lester who lived here, in a Hut improvised from a water boat, from January 1921 until January 1922. Although only the base of the boat, foundations of doorposts and an outline of the hut and extension still exist,

Refuge Casa de Botes (aka Waterboat Point Hut), is found at 64º 49′ 25″ South,  62º 51′ 26″ West,  Danco Coast, Antarctic Peninsula. This Hut, situated close to the Chilean station President Gabriel Gonzáles Videla (WAP CHL-Ø6) was occupied by the UK two-man expedition of Thomas W. Bagshawe and Maxime C. Lester in 1921-22. At the beginning, only the base of the boat, foundations of doorposts, an outline of the hut and extension did exist. The remains and immediate environs have been designated a Historic Site or Monument (HSM 56),  following a proposal by Chile and the United Kingdom to the Antarctic Treaty Consultative Meeting. Chile and UK Parties undertaking management. Original proposing Party: 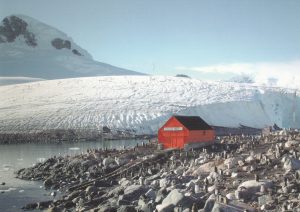 Time ago, WAP did receive a postcard, clearly showing Casa de Bote Hut, near Gabriel Gonzáles Videla Base. At the light of what discovered and reported , we are still asking which one of those mentioned above, could be the one shown on the picture. Not certainly Waterboat Point Hut coinsidering that documents say: “only foundations of doorposts, an outline of the hut and extension did exist. The remains and immediate environs have been designated a Historic Site or Monument (HSM 56)”

WAP will be grateful if someone can help us to solve this issue, while, in any case both HSM-30 and HSM-56 Huts will be shortly listed on WAP Direcotry under WAP CHL-NEW