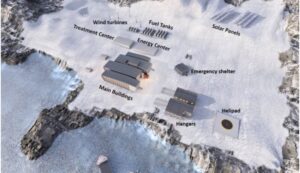 The planned Turkish Antarctic Research Station (TARS) is to be built in the southern part of the Antarctic Peninsula on Horseshoe Island. Between 24 and 50 people are to be accommodated in the station, which is to operate all year round. The graphic shows the various buildings and structures planned. (picture aside)

Horseshoe Island which is almost 12 km long and 6 km wide  is located  at 67°51’South, 67°12’ West, in the southern part of the Antarctic Peninsula in Marguerite Bay, well below the Arctic Circle. Nearby are the British station Rothera (WAP GBR-12), the Argentine station San Martin (WAP ARG-Ø8) and at 67°48’30”South, 67°17’39” West,  the old Station Y also known as Horseshoe Base (WAP GBR-14), an inactive but relatively unaltered and completely equipped British research Refuge  of the late 1950s. It includes ‘Blaiklock’, a nearby Refuge Hut (WAP GBR-NEW), been designated a Historic Site or Monument (HSM 63), following a proposal by the 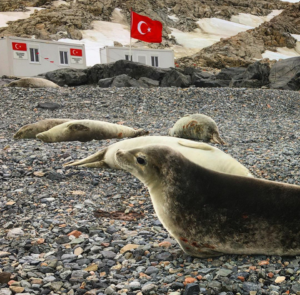 According to the Turkish Polar Institute TUBITAK MAM PRI, which is responsible for the management and operation of the station, the TARS (Turkish Antarctic Research Station) should be able to accommodate up to 50 people after completion. After a two-year trial run during the Antarctic summers, it will be eventually operated year-round and will advance the national Antarctic research program. Research areas include climate and ice science, atmospheric and space sciences, biological and earth sciences, and the impact of human activities on Antarctica. These research branches are part of the Turkish Polar Research Program, which has been in force in Antarctica since 2017.

The planned station will be built with prefabricated components produced in Turkey. Within two years of receiving the green light, the station should be ready for operation. Currently, only containers for eight people are available on Horseshoe Island to serve as a summer research camp. 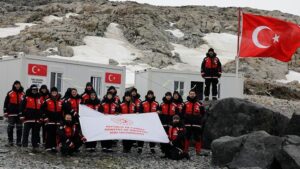 Turkey is one of the youngest Antarctic nations and is hitting the accelerator. A first Antarctic expedition with Turkish participation was launched in 2016 together with Ukraine.

After Turkey ratified the Madrid Protocol on the Environment in 2017, the way was clear for its own expeditions. Just one year later, the temporary research camp was set up on Horseshoe Island. This is now to be replaced by the new Station.