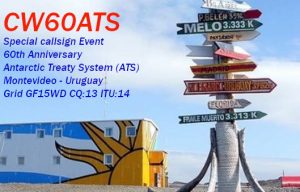 Carlos Andrés Molina Vera, CX8ABF has informed WAP that the Telecommunications Administration of Uruguay (URSEC) has issued a Special Call CW6ØATS to celebrate the 6Øth Anniversary of the Antarctic Treaty Signature.

All the information have been loaded on QRZ.com (See https://www.qrz.com/cw60ats )

In the past (from 1987 through 2005) Artigas Base was frequently active on HF with quite a few  calls. One of those was  CXØXY. Since 2005 nobody else has been on air from there. 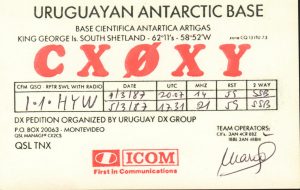 We hope some day in the next Antarctic Sesons, pne of the researchers can activate Artigas Base again and maybe also, Teniente de Navio Ruperto Elichiribehety  Stations which has never been activated!

For now, we congratulate Carlos Andrés Molina Vera, CX8ABF for his efforts and we thank the Telecommunications Administration of Uruguay (URSEC) for its domonstrated sesitivity in joining the 6Øth Anniversary event.

CW6ØATS WAP-336 is on air. QSL will be confirmed  through Eqsl Lotw, Clublog.