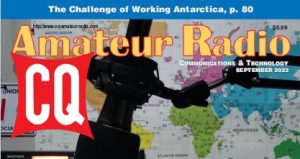 This month, the prestigious American CQ Magazine dedicates a couple of pages about the fondness,  of the most rare DX in the career of a Radio Amateur: connecting Scientific Bases in Antarctica!
The report is written by our great friend Bob Hines K4MZU with a foreword by another “Big Ham”, N2OO Robert W Schenck 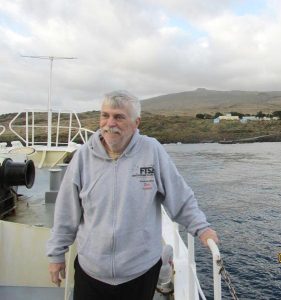 N2OO (pic on the right) writes:
«As I have often related, chasing DX isn’t always about the DXCC or CQ DX Awards. Sometimes, the chase is for a more specific goal. In this case, I have passed the keyboard over to Bob Hines, K4MZU, who will give you a little insight into amateur radio activity in Antarctica over the years and a look at the Worldwide Antarctic Program (WAP). Working Antarctica stations has always been exciting for me, although I never chased a particular award for doing so. But I always tried to get a QSL card from every station I could work. I hope you enjoy Bob’s article this month! – 73 de N2OO»

Working a Station in Antarctica is always a Great Experience

By Bob Hines, K4MZU (on the pic below)

Logging stations operating from Antarctica has been the best DX many can wish for. Several Hams, particularly the old timers, have progressed far but just a few of them have over 200 Antarctic bases in their logs. 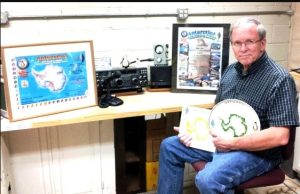 This takes years and years of continuous monitoring, setting skeds, following Antarctic expeditions and scientific seasons, all with only one goal; to work a new one. Bases, camps, huts, refuges, and rare scientific sites are the rewards of ample research done by these Antarctic DX hounds. Currently, there are many different Antarctic DX programs and awards available from Argentina, Australia, France, Italy, Poland, Russia, and Ukraine. Two sought-after Antarctic awards are sponsored by the Worldwide Antarctic Program from Italy, with Gianni, I1HYW, and Massimo, IK1GPG, at the helm; and the Polar DX Group managed by Mehdi, F5PFP. Among those meticulous Antarctic hunters is yours truly, Bob, K4MZU. I have achieved the popular WAP Top Honor Roll, top of W.A.P. Worldwide Antarctic Program, WADA Award, 202 Antarctic Bases and WACA Award, with 513 Antarctic stations’ callsigns. I have also achieved the top Antarctic Challenge 2022 Award with 203 Antarctic/sub-Antarctic bases and refuges. Please visit my Antarctic website at www.k4mzu.net to see my Antarctic QSL collection.

Here’s a look back at my long devotion to chasing stations in Antarctica. After getting licensed in 1959 (age 16), I immediately started working DX (no problem with a SFI of 270-290).

Then, I snagged my first Antarctic contact, VP8EH … and I was hooked. Working stations like KC4USE/mm (USCGS Eastwind), KC4AAA/mm (USCGS Eltanin), KC4USR/mm (USS Arnet) and KC4USG/mm (USS Glacier), all late night with polar flutter and often the only signals on the band, was a genuine delight. Later on, from 1970 to 1995 with a much-improved station, I would team up with Larry, K1IED (SK). He would handle phone patches (No satellite phones for personal use then) for KC4USV (McMurdo Station), KC4AAA (South Pole Station), and KC4AAC (Palmer Station). I would do the same for many of the smaller remote sites such as KC4USB (Byrd Surface Camp), KC4USX (Williams Field), KC4AAF (Upstream Bravo Camp), KC4AAG (Terra Nova Bay Camp), and renowned Mr. Henry Perk, VEØHSS/am, who I often claimed would fly from one Antarctic camp to the next in his Twin Otter like I might visit the 7/11 down the street. All during the period from 1959 until now, I have been fortunate to log numerous Antarctic stations from different countries that are signatories of the Antarctic Treaty. Some were quite rare at the time: LU3ZY (South Sandwich Argentinian Station), ATØA (Dakshin Gangotri Indian Station), VKØVK (Australian Wilkes Station), 3YØC (Norwegian Research Station Bouvet), R1ANH (Russkaya Russian Station), and Astronaut Owen Garriott, KC4/W5LFL (SK) at Multi National Patriot Hills Station. Being a passionate Antarctic DX Chaser, one feels compelled to help with QSL responsibilities. Accordingly, over the years I gladly became QSL Manager for LU1ZC (now QSL via LU2CN), VP8AWU, VP8MS, VP8DPC/mm, VP8SIX, C6AMD/mm, R1ANW (op. Henry), KC4/KH6JNF, KC4/KA7DHE, KC4/KC7GJJ, KC4AAF (ops. Sarah, Henry, and Ted), KC4AAG (op. Oriel), KC4/VEØHSS, KC4AAC (op. Janet), (currently KC4AAC, KC4AAA, and KC4USV all are QSL via K7MT), KC4USX (op. Henry), and KC4/KL7RL. I’m 79 years young now and would love to have operated from the ice. Nevertheless, the reality that I have acquired many friendships with those fortunate enough to travel there, along with my fellow Antarctic DX chasers is, most gratifying.