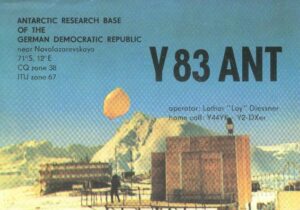 We have to thanks 2 Antarctic veterans, several time operating from this Antarctic site, who did help WAP to write a true  story of this East Germany (GDR) laboratory, established near the Russian Novolararevskaya Sation: Ing. Andreas Mueller DL3LRM, and Dr. Volker Strecke DL8JDX.

«Historically, the team from East Germany has been a part of the Russian Novo Station since the late 1970s, but had their own base about a kilometer away from the main building. In 1987, this base (a set of containers and an antenna areal) was named “George Forster” in order to become the first official research station of East Germany, as part of their efforts to be part of the Antarctic Treaty (which demands that a Country has to run a permanent all year base in Antarctica). So this is the reason why the QSL only states “near Novolazarevskaya”, since in 1983, as “George Forster” was not established yet. Had the privilege to visit that site and the plague twice, and also to met some of its residences».

Volker, another old time Antarctic veteran and operator of Georg Forster Station (WAP DDR-Ø1) sent us a complete explanation that clarifies the entire story on the GDR activity in Antarctica.
Volker wrote:

«The former East Germany (German Democratic Republic GDR) acceded to the Antarctic Treaty System (ATS), see http://www.ats.aq  on November 19, 1974, initially as non-consultative member. The GDR built this “Container station” in 1976 in the Schirmacher Oasis near the Russian Station Novolazarevskaya (WAP RUS-Ø9). It was called GDR Base Laboratory near Novoalazarevskaya. The only one HAM Radio activity from that Base Laboratory,  between 1976 and 1987 was Y83ANT in 1983. 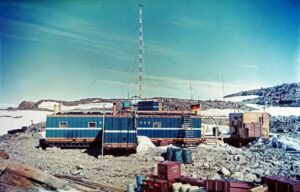 Picture aside, shows an old view,  shortly after the completion of the GDR Base Laboratory near Novolazarevskaya in 1976 (Photo: Hartwig Gernandt, AWI Bremerhaven). 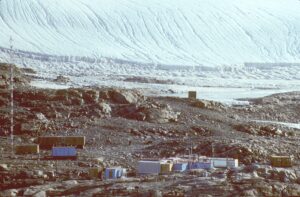 After ratification of the Treaty, the GDR received ATS consultative status on October 5, 1987. This was associated with an own research station in Antarctica. So the existing base laboratory was officially named GDR Antarctic Research Station Georg Forster (WAP DDR-Ø1) at Oct. 25, 1987.

In the summer season 1987-1988 at Georg Forster,  a completely new radio station was built. Georg Forster did get the marine Call Y3ZA and the land-based Call Y3G. The radio system was a very powerful and reliable: KSS-1300 with 1 KW, able to operate in CW, SSB and SITOR Telex, several EKD-500 receivers, an extremely good working 2x85m V-Beam, a corner reflector antenna, a diversity antenna, a vertical antenna and several wire antennas». 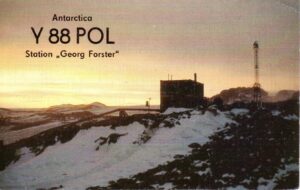 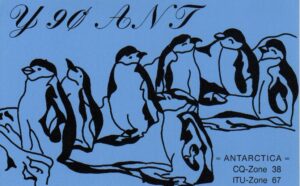 The Georg Forster Base had 5 overwintering teams:

After the German reunification at Oct. 3, 1990 it was decided later that the further German Antarctic research activities would have been focused at Neumayer II Base and its surroundings. So in the years 1994, 1995 and 1996 the entire Georg Forster Station had been dismantled and disposed of.

A commemorative plaque was left at this place. The former Georg Forster base was included into the ATS  list of historic sites in Antarctica with No. 87.

Volker concludes his report saying: «Andreas, DL3LRM is completely right with his comments based on his experience. As he was op. at DPØGVN in Neumaye III and operator at DP0POL/MM on the icebreaker Polarstern, He is the real expert and one of the few persons who were in the Antarctic and in the Arctic in the same year (2020)».

Thanks to Volker, DL8JDX, (WAP Ambassador) and operator in several Antarctic Overwintering Expeditions: 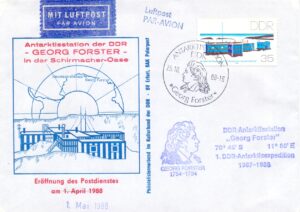 Photo 3 here at the right: Georg Forster First Day cover with special stamp for the opening of the postal office at May 1, 1988  (Volker Strecke)

Documents say: The site of the former Georg Forster  station is marked by a bronze plaque. It has been designated a Historic Site or Monument (HSM 87), following a proposal by 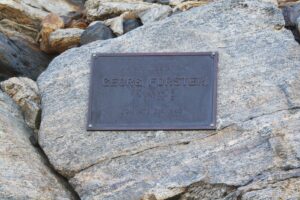 At the light of this new evidences, a new WAP reference number WAP DDR-Ø2 has been issued to:
GDR Base Laboratory near Novolazarevskaya,

The applicants who have submitted Y83ANT as DDR-Ø1, will be automatically credited DDR-Ø2  to it, and they eventually have to submit one of the two calls Y88POL or Y90ANT for DDR-Ø1.

Once again, thanks to DL8JDX and DL3LRM for their evaluable help and support.