Almost at the end of their Antarctic seson, our friends Oleg ZS7ANF and Sebastian SQ1SGB meet at Wolf’s Fang Runway. (see pics aside)

It was a friendly meeting between two Hams,  involved in different activities in Antarctica.
Both,  in their spare time, have been active on HF;   Sebastian signing VP8/SQ1SGB at Halley VI-a Base (WAP GBR-40)  was mostly active daily on 40 mts SSB,  while Oleg ZS7ANF did use CW on 20, 30 and 40 mts from Wolf’s Fang Runway (WAP MNB-12 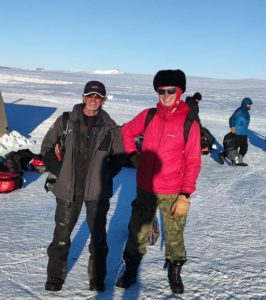 QSL for 2021-2022 Antarctic season have to be requested as follow:
ZS7ANF via RK1PWA or via ZS1ANF

71°32’ South, 08°50’ East,  Wolf’s Fang Runway is the only exclusive private runaway in Antarctica. With the assistance of the South African science vessel, the fuel supplly for the Camp is delivered to the edge of Antarctica. A traverse Team then embarks on a journey of 800 Km across the Finbul ice shelf to WFR. Using specialist techniques and machinery,  a runway that is uncompromising in its safety and that minimises the likelihood of delay, has been created. With experienced pilots making more than 20 flights per season, Wolf’s Fang is now

regarded as a well-established and reliable airbridge between Africa and Antarctica.

Pic on the left,  shows the A-340 aircraft were Seba is embarked on, in departure to Cape Town

Wolf’s Fang Camp in the vicinity is a  newest camp where luxury and adventure meets in the mountains of Queen Maud Land. The Camp is equipped with 6 heated tents with twin or single bed and ensuite washroom.

Seba will be home  at Biesiekierz, Poland about March 10th