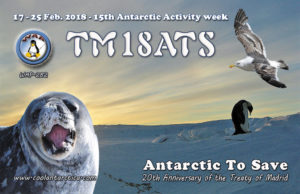 Two more days then the 15th AAW will officially start.

Some stations, who have received the license to operate their Special Callsigns, have already begun to be on the air, so from now and ahead the game is on.
30 are the stations worldwide with a Special Callsign  credited so far for the 2018’s edition and we are happy to see some new QSLs already printed for the yearly international event.

Thanks to Tony  F8ATS who will be on as TM18ATS WAP-282; his card spread a great message: Antarctic to Save … let us share it worldwide too.

Have fun to enjoy Antarctica as much as we do!