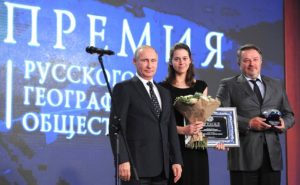 Russian President Vladimir Putin was awarded a prize by the Russian Geographical Society in the category “Popularization of natural, historical and cultural heritage of Russia”.

In this category, which was won by the documentary “Vostok Station. On the threshold of life.” The award from the hands of the President received the producer of the project Alexander Zhukov and Director Olga Stefanova.

The award is presented once every two years and has international status. It was first presented in 2014.

Vostok Station (WAP RUS-13) is an in inland Russian Research Station located at Princess Elizabeth Land, Antarctica. Founded by the Soviet Union in 1957, the station lies at the southern Pole of Cold, with the lowest reliably measured natural temperature on Earth of −89.2 °C. Research includes ice core drilling and magnetometry. Vostok was named after Vostok, the lead ship of the First Russian Antarctic Expedition captained by Fabian von Bellingshausen.