Giacomo Bove (23 April 1852 – 9 August 1887) was an Italian explorer. He sailed with Adolf Erik Nordenskiold on the first voyage through the North-East passage, and later explored Tierra del Fuego . Giacomo Bove was born in Maranzana, Asti, Piedmont, on 23 April 1852 to Francesco Bove and Antonia Garbarino. He was the eldest of five brothers. His family owned a vineyard and made wine for sale. He went to primary school in Maranzana and then in Acqui Terme, before being admitted to the Naval Academy in Genoa. He graduated with honors, and was able to serve as a midshipman on the scientific expedition of the Governolo to the Far East. 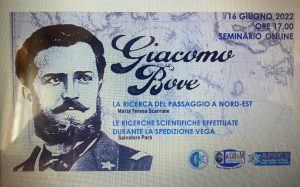 Scientific research carried out during the Vega expedition, by Salvatore Puro

If anybody wish to join, please send the request to info@giacomobove.it  to get a reservation 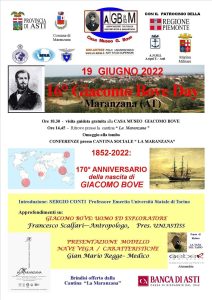 The Municipality of Maranzana, the Province of Asti, the Giacomo Bove House’s Museum, UNI-ASTISS University, Higher studies Pole, with the patronage of the Piedmont Region, present

Tribute to the explorer’s tomb

Followed by a toast party, offered by the winery “La Maranzana