Alan Lee, is a very sympathetic person who spent some summer campaign in Antarctica. Al is  also the director of Alinga Constructions Pty Ltd which was incorporated in 1996 and still operates to the present day.

Al’s favorite part of his job at Casey Base (WAP AUS-Ø2) is getting a smile from the expeditioners when they see and experience the finished product.

While describing his Casey experience, Al said: Working in the red shed, the smell of the bread baking always has my mouth water. The hiss of the ski slicing across the snow, sometimes the smell of sea side salty fresh air drifting in, as I travel around the ski loop. From penguin pass in the early evening, as the light slips away and the stars begin to twinkle, Casey/our home beacons, it’s cosy, friendly, there’s a warm dinner waiting and inside things to do. Let’s go then.

We are often asked how we spend our free time, and do we get out and about from the station. The answer is yes we do! As much as time and weather allows. One of the best activities is to go to one of four huts in our station operating area. The four huts are in order from north to south: Jack’s, Wilkes, Robbo’s and Browning’s.

All these Huts & Refuges are listed in WAP-WADA Antarctic Directory, the most complete book WW to have surveyed all (or almost all) the Antarctic, Sub Antarctic and Peri Antarctic sites, such as Bases, Cammps, Huts, Shelters and Refuges. WAP-WADA Directory is updated twice a year.

Everyone can download the WAP-WADA Directory from: http://www.waponline.it/wap-awards_download-rules/wap-wada__wap-waca_directories/, it’s free! 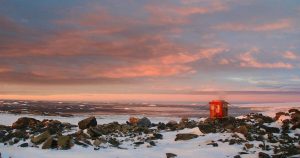 Jack’s is the smallest and sits on a rocky outcrop overlooking the Swain Island group. The hut sleeps four, and is very snug fit. It also has a detached toilet with a great view which often blizzes in with snow. Jack’s is about 16km by GPS route and is a perfect vantage point to watch the sunrise and sunset. 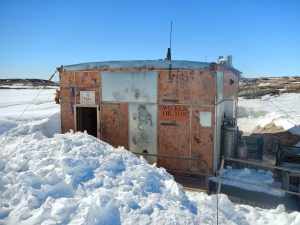 Wilkes Hilton (Picture to the Right) is the oldest hut in our area and comes with the heritage of being originally part of the US Station before Australia took it over in 1959. The huts lies across Newcomb Bay from Casey and is about 10km by GPS route. The hut is the old radio shack, is by far the biggest hut and sleeps eight. The hut also still has a pot belly stove which makes it quite comfortable to stay in. 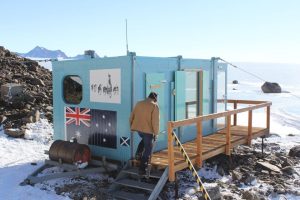 Robbo’s (pic to the Left) is the only hut with a deck which makes it hard to beat on a nice day. It overlooks Sparkes Bay and Odbert Island which has one of the area’s largest Adélie penguin colony. It sleeps 5–6 and is about 18km from Casey to the south. 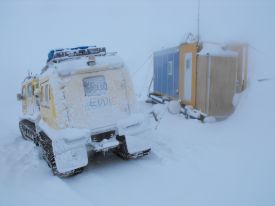 Browning’s is the furthest of our huts at about 60km from station by GPS route. The area around Browning’s is spectacular with lots of hills, rocks and lakes. The area is also where we find elephant seals at different times of year. The hut can sleep 6 but the table is really made for 4 or 5 so it’s quite a squeeze, but it works.

TNX  Alan Lee, from Perth, Western Australia for sharing his experience  and for the pics of the Casey Huts/Refuges.

Thanks Alan Lee and credit to  Australian Antarctic Program