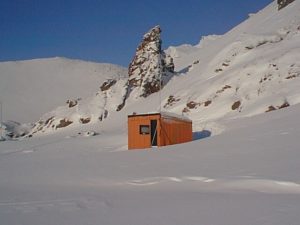 It is operated by the Argentine Army and was inaugurated on August 17, 1957.

It depends on San Martín Base (WAP ARG-Ø8), which is five kilometers away on Barry Island. The refuge consists of a red hut, used by the personnel employed in the missions carried out in the area, and has a capacity to accommodate four people, enough food for two weeks, fuel, gas and first aid kit

Even of this facility  is listed on WAP-WADA Directory, the Argentinean   “Refuge 17 de Agosto”   has never been activated by Hams, so it remains a WAP brand “New One”.
While hoping next time the guys going there can bring a RTX & antenna and put this Refuge up “On the Air”, enjoy the 5′ video here below