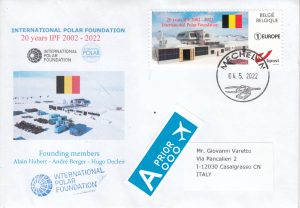 Founded by Belgian polar explorer Alain Hubert, Prof. Hugo Decleir and Prof. André Berger in 2002, the Brussels-based International Polar Foundation provides a novel interface between science and society, and was recognised by Belgian Royal Statute as a foundation for the public good in 2002. HM King Philippe is the International Polar Foundation’s honorary President.

The Foundation seeks to bring about a keener appreciation of the role of science, particularly research in the Polar Regions, through a re-examination of the planet’s interconnections, its fragility, the impact of human actions on the environment, and the evolution of millennial climate cycles.

The International Polar Foundation supports polar scientific research for the advancement of knowledge, the promotion of informed action on climate change, and the development of a sustainable society.