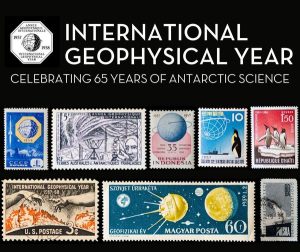 2022 is the 65th anniversary of the International Geophysical Year, or IGY, a collaborative, worldwide effort among 60 countries, 10,000 scientists and multiple scientific fields to study the Earth and sun. Today we celebrate the amazing contributions made possible by one of the most successful international scientific efforts in history.

An 18-month-long effort, the IGY took place from July 1, 1957, to Dec. 31, 1958. It launched a new era of scientific discovery that has fundamentally changed the way researchers understand the planet.

Coinciding with the peak of the 11-year solar cycle where the sun’s magnetic field flips, the IGY was timed 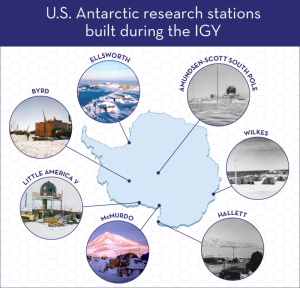 so scientists could study sunspots and observe the sun’s corona during a solar eclipse. Scientists designed and built instruments to study the atmosphere and near space environment, deployed seismic equipment to study earthquakes and ice sheets and used newly constructed radio and astronomical observatories to observe the sun and stars. For their research, scientists adapted many technologies first developed during World War II.

The U.S. National Science Foundation, which had been established just seven years earlier, was instrumental in supportingand coordinating IGY research by U.S. Scientists. NSF began planning for the IGY and issuing grants to researchers in 1955, a massive undertaking that required building infrastructure to house and support scientists in some the most remote and harsh environments on the planet.

Thanks and Credit to the U-S.  NSF