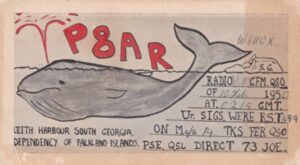 Thanks to Mehdi F5PFP for having shown an old QSL card of VP8AR who did operate from Leith Haurbour in 1950,  WAP is happy to issue a reference number for this unreferenced Brithish station in the South Georgia islands.

Leith Harbour, Britain’s abandoned whale hunting stations is now WAP GBR-41. The New reference  will be add to WAP-WADA Directory on its next release (June 2021).

Between 1909 and 1965, the whaling station of Leith Harbour on South Georgia was one of the busiest whaling stations in the world, with more than 48,000 whales processed into oil for margarine, bone meal for fertiliser and other products. A film crew was granted access to the abandoned whaling stations, and a new BBC4 documentary shows the remains of whaling life, and the wildlife that is re-colonising Leith Harbour.

Leith Harbour whaling station and Stromness Bay, in South Georgia, is part of British overseas territory in the southern Atlantic Ocean. The station was established in 1909, and finally abandoned for good in 1965. It is now off-limits to visitors due to dangerous buildings and high levels of asbestos. At its peak Leith Harbour housed 500 men and was the biggest whaling station in the world. A steam-saw on the bone loft used for cutting up the skulls and spines of whales, which were boiled to extract oil. Up to 29 tonnes of oil could be extracted from each whale by putting its blubber, meat and bone through different industrial processes. In 1933, 37% of the fat in British margarines was from whales. 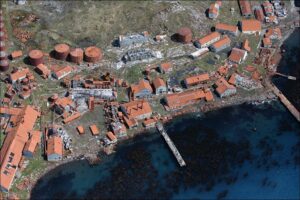 WAP has actually  no evidence that, other than VP8AR in 1950 someone else did operate Ham Radio from there. So far, it looks like no one operated from Leith Harbour after this one. (Pic aside shows an aerial view of Leith harbour)

Read more and watch the nice pics to “The Guardian” site, to which we say Thanks and credit: https://www.theguardian.com/environment/gallery/2014/jun/10/britains-whale-hunters-in-pictures

Leith Harbour WAP GBR-41 was a whaling station on the northeast coast of South Georgia, established and operated from 1909 until 1965. It was the largest of seven whaling stations, situated near the mouth of Stromness Bay.