How far and wide does Don Bosco go? Certainly up to the more than 130 countries on the five continents where the Salesians are present today. What if you wanted to go even further? 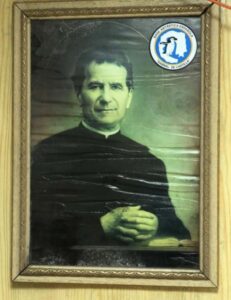 Well, if we were to go to Antarctica, we’d also find a small image of Don Bosco there too. This photo was taken 15,073 kilometers from Spain as Don Bosco is present as patron of the military contingent that accompanies environmental researchers on the Antarctic Continent.

The Spanish Antarctic Station Gabriel de Castilla (latitude 62º 55’ S and longitude 60º 37’ W) WAP ESP-Ø2 is located on Deception Island, in the archipelago of the Southern Shetlands . The station is managed by the operations Bureau of the Army General Staff, which organises and directs the operation of the Station. During the the refuge “Gabriel de Castilla” was set on Deception Island, during the Spanish Antarctic campaign of 1988 and being officially inaugurated in 1989 as a military refuge to support research and topographical surveys.

Since its installation, this refuge has been managed by the Army, in close collaboration with the UTM-CSIC. In 1998 the refuge was classified as an Antarctic Station, and in 1999 as a ICTS. Since then it has undergone various periods of remodelling, the most important in the year 2009. This station is designed to carry out singular, cutting-edge scientific activities, and its results are valuable for polar research. Due to its singular nature, it is at the disposal of the national and international scientific communities, hosting studies concerning volcano monitoring, astrobiology, geology, and ecology.

How did this initiative come about?

The first seminar on the Corps of Specialists was held at the Navacerrada Residence (Madrid) on 27 and 28 November, 1998. Among other things, the convenience and the need to have a specific Patron who could serve as an element of unity and generator of the spirit of the Corps was demonstrated; hence, for the elections, the existing traditions were reviewed and, taking care to preserve the ones with which the majority of the staff members of the Corps of Specialists identified, most having been students of the Professional Institutes, centers that very often venerated St John Bosco, On January 24, 2000, in a communication from the Army Chief of Staff,  St. John Bosco was officially designated as Patron of the Specialist Corps of the Ground Army, after his approval in the corresponding act, issued by the Congregation for Divine Worship and the Discipline of the Sacraments, and sanctioned by Msgr. José Manuel Estepa Llaurens, then Military Ordinary of Spain.

Every year the Specialists of the Ground Army celebrate Don Bosco on February 1st.