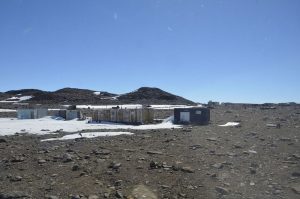 A group of scientists have arrived at the only Polish research station on mainland Antarctica, which has been dormant since 1979 but will now be reactivated.

The team, headed by Marek Lewandowski and which includes Monika Kusiak, the first Polish woman to work at the station, arrived at the Dobrowolski Polar Station (pic aside) on Saturday morning Polish time, almost two months after setting off on their expedition.

They will now spend around six weeks reactivating the station in the Bunger Hills, also known as Bunger Oasis, and setting up equipment which will conduct seismic and magnetic measurements.

A.B. Dobrowolski Polar Station is an inactive Polish polar research station in Antarctica. It is located at the edge of the Algae Lake , Bunger Hills region, in the Wilkes Land and was originally constructed by the Soviet Union in 1956 and named Oazis (WAP RUS-NEW). The station was handed over by the Soviert Academy of Science to the Polish Academy of Science in January 1959. It was manned briefly by the Polish expedition, which carried out a number of studies, primarily in the fields of gravimetry and geomorphology. The station has not been used regularly since, due to the lack of funds and the high costs of air transport. The station has been visited periodically by Polish and other research teams.

A.B. Dobrowolski Polar Station (WAP POL-NEW) is one of the two Polish stations in Antarctica, the other (pic aside) being the Henry Arctowsky Polish Antarctic Station (WAP POL-Ø1) operating continuously since 1977, located on the Island of King George in the South Shetland archipelago, and the station that has not been used for about 40 years,  the A.B. Dobrowolski Polar Station (named after Polish geophysicist, meteorologist and explorer Antoni Boleslaw Dobrowolskin).