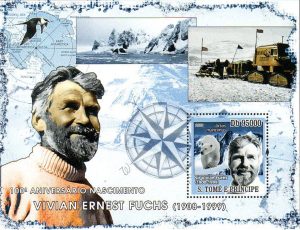 Sir Vivian Ernest Fuchs (11 February 1908 – 11 November 1999) was an English  explorer.  Fuchs is best known as the leader of the Commonwealth Trans-Antarctic Expedition, a Commonwealth-sponsored expedition that completed the first overland crossing of Antarctica via the South Pole in 1958

Planning for the expedition began in 1953, and envisioned the use of Snow Cat tractors to cross the continent in 100 days, starting at the Weddell Sea, ending at the Ross Sea, and crossing theSouth Pole.

Fuchs and his party arrived in Antarctica in January 1957 after camp had been set up. The party departed from Shackleton Base on 24 November 1957. During the trek, a variety of scientific data were collected from seismic soundings and gravimeteric readings. Scientists established the thickness of ice at the pole, and the existence of a land mass beneath the ice. On 2 March 1958, Fuchs and company completed the 100-day trip by reaching Scott Base, having travelled 2,158 miles.

In 1958, Fuchs was knighted by Queen Elizabeth II.  He co-wrote, with Sir Edmund Hillary The Crossing of Antarctica. In 1959 he was awarded the Hans Edge Medal by the Royal Danish Geographical Society.

The Commonwealth Trans-Antarctic Expedition (CTAE) of 1955–1958 was the first expedition to reach the South Pole overland for 46 years, preceded only by Amundsen’s expedition and Scott’s expedition in 1911 and 1912.