We are continuing our virtual visit to the Churches located far South, in Antarctic regions. Today, weare stopping by at: 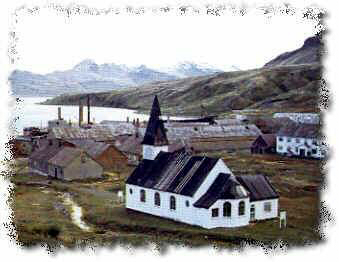 Grytwiken, was an old whaling site and port. In several whaling ports,  there was a building dedicated as a Whalers’ Church. This one,  however is a typical Norwegian church and is the only building at Grytviken that retains its original function. A box with candles show that services are still being held here every now and then.

Inside  there are memorials to Carl Anton Larsen and Sir Ernest Shackleton, whose funeral was held here. There are also two bells, which visitors are invited to ring.

Still in use, the Church was pre-fabricated in Norway and shipped to Grytviken for assembly. The Church was consecrated on Christmas Day 1913.

The
church’s wooden structure has deteriorated over the years, and storm
damage to the roof in 1994 prompted a major program of restoration,
which is now complete and the Church did reach its original
characteristic.

The first pastor of the Whaler’s Church at Grytviken, was Kristen Loken and the position has remained vacant since 1931.

Kristen
Lóken, had to admit that “religious life among the whalers left much to
be desired”. The church has been used for a few baptisms and marriages.
The first baptism was on Christmas Day 1913, and 13 births have been
registered on South Georgia. There have also been four marriages – the
most recent in 1999 – but the church has been used more often for
funerals. Twelve men died in 1912 of typhus brought by ship. 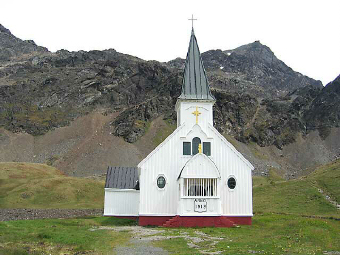 The church cemetery contains many empty graves for sailors who perished at sea.

The
recently restorated whaler’s church can be reached by walking from the
cemetery, towards Grytviken, via a muddy path and over the former
whaler’s soccer field. Walking between the old buildings is not allowed
anymore.

WAP
did launch in the 2003 a project to build a Catholic Church in
Antarctica on the Italian Base Mario Zucchelli Station. This is still
our challenge.
Stay with us and share with us the initiative!