From: Wikipedia, the free encyclopedia
http://en.wikipedia.org/wiki/Trinity_Church,_Antarctica 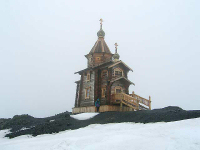 Trinity Church is a small Russian Orthodox church on the King George Island near Russian Bellinghausen Station in Antarctica. It is the southernmost Eastern Orthodox church in the world.
The ambitious project to establish a permanent church or even a monastery on Antarctica surfaced during the 1990s. A charity named Temple for Antarctica was approved by Patriarch Alexius II and received donations from across Russia. They organized a competition for the project that was won by architects from Barnaul P.I. Anisifirov, S.G. Rybak and A.B. Schmidt.
The
church is a 15m-high wooden structure built in traditional Russian
style. It can accommodate up to 30 worshippers. The structure was built
out of Siberian Pine by Altay carpenters led by K.V. Khromov, then dismantled, shipped to Antarctica (by the ship Academician Vavilov) and assembled there by the staff of Bellinghausen Station.

The iconostasis was created by Palekh painters. The church bells were paid for by the descendants of Sergey Muravyov-Apostol.
The church was opened on May 29, 2004, the Pentecost or Trinity day according to the calendar of the Russian Orthodox Church. The church was blessed by Hieromonk Kallistrat (Romanenko), head priest of Troitse-Sergiyeva Lavra, who visited Antarctica for this occasion. The permanent priest of the church is Father Georgy, who has twenty years of polar experience and now lives permanently near his church.
Among his tasks is praying for the souls of 64 Russian people who died in Antarctic

expeditions and serving as the spiritual needs of the staff of Bellinghausen Station and other nearby stations.

World Wide Antarctic Program. A Catholic Church in Antarctica … a Challenge from WAP, 29 January 2006. Visited 15 April 2006.
2. The St. John of Rila Chapel at Bulgarian St. Kliment Ohridski Base is an Eastern
Orthodox chapel located further south and the Chapel of Snow at United States McMurdo Station is the southernmost religious building in the world. Whether a chapel is a type of church depends on the definition.
Other related links:
http://r-oc.1gb.ru/viewpage.php?cat=antarctic_continent&page=1
http://community.livejournal.com/ru_woodarch/82379.html?

In the year 2003, WAP did launch the iniative to build a Catholic Church at the Italian Base “Mario Zucchelli” located at Terra Nova Bay in Antarctica.
I’m sure we will (the Russians did it very well) accomplish our mission and we’re sure, one day our Church will be on down there as well!