On last December 22, under intense sleet, honors were paid at the national pavilion to all the people who have passed through the Artigas Antarctic Scientific Base (BCAA) in the framework of its 33rd Anniversary.

The event included members of the Antarctic Programs present on King George Island. Greetings and gifts were received from their bases and the personnel of the Ship Rou Artigas. 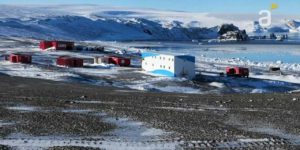 M/V Rou04 General Artigas is a ship of the Uruguay National Navy that travels to Antarctica. The ship participates in the “Operation Antarkos XXXIV” with 120 crew members on board, of which 15 are students of the Naval School.

Purpose of this operation is carrying out the Antarctic Campaign between November 15, 2017 and March 30, 2018, making a stopover in the port of Punta Arenas, Republic of Chile. The mission consists of the logistical support of the Artigas Base (picture on the right) through the replenishment of materials for the continuity of the National Antarctic Program, for which 105 tons of general cargo are transported.