WAP is happy to read that next 3YØJ Expedition to Bouvet Island ( Novem,ber 2022) will be set at Kapp (Cape) Fie,  which site will enter  for now, into the WAP Directory, as WAP NOR-New 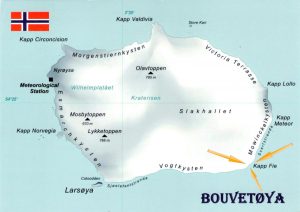 Here is the statement:
After discussing with the Norwegian Polar Institute (NPI) and other experts the Expeditionners have come to the conclusion that the only possible place to setup a camp SAFELY is at Cape Fie at the South East part of Bouvet. Cape Fie was first roughly charted in 1898 by a German expedition under Carl Chun, and was re-charted and named by the Norwegian expedition under Captain Harald Horntvedt who explored the area in December 1927.

Cape Fie,  54° 27′ South,  3° 28′ East  is a rock formation at the South East part of the Island, the only safe place to stay for a longer duration overnight. All other locations have a high risk for rock or icefall or large amounts of seals.

Norwegian Research Station Bouvetoya (aka Nyroysa), WAP NOR-Ø2 is not  accessible due to the Bouvet Regulation (that came into force in 2005), which restricts access to only allowed scientific research activity.

Kapp Fie , 54° 27′ South,  3° 28′ East, South East side of Bouvetøya (Bouvet Island), will (provisionally) enter into “Section 2, Sub & Peri-Antarctic Territories”  of WAP-WADA Directory as NOR-NEW. Later,  when the operation will start, a full Reference number will be given.