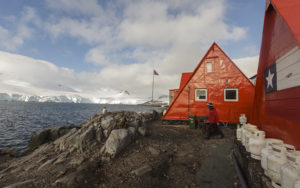 Warm regards to researchers and logistics staff at  Yelcho Base (WAP CHL-11), the third of the three platforms managed by INACH in the Antarctic Peninsula. It was inaugurated in 1962, and in 1986 assigned by the Chilean Navy, to the Chilean Antarctic Institute. It  had a recess,  between the years 1998-2014, and in 2015 was reopened to scientific activities. Currently, the Base  can host 22 people and houses several research projects.

Yelcho Base  takes his name from the Chilean military ship Yelcho known for participatig in the rescue of men from the Endurance of Ernest Shackleton shipwrecked in Antarctica in 1916 with all the crewmen.

Actually, Yelcho Base 64° 52’ South, 65° 35’ West, is another strategic point for the development of Antarctic science. It is located near the South Bay, on Doumer Island, and has the advantage of being very close to populations of underwater and terrestrial vegetation.