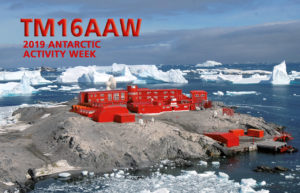 Last Antarctic Activity Week (Febr.2019) has seen a great participation of Hams from several countries WW. Since 16 years, François  F8DVD, one of the most active Antarctic enthusiasts, takes part in the event with a special callsign as usual.

Last past AAW 16th edition, he got TM16AAW and now he shows the QSL that will confirm his QSOs.
QSL have been printed by the printing shop at IT9EJW company

The picture shows the Base O’Higgins (WAP CHL-Ø2) which is a Chilean station established in 1948. The O’Higgins Base is situated at Cape Legoupil on Trinity peninsula (63°19’ South,  57° 53’ West). The German Antarctic Receiving Station (GARS)   was established at O’Higgins in 1991 by the German Aerospace Center. It is a satellite ground station sited to enable reception of data from satellite-based sensors within the Southern Polar region.