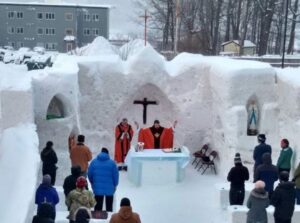 The news reporting the build of an “Ice Chapel” outside St. Albert The Great Parish on Michigan Tech’s campus,  (see picture aside) reminds us the Ice chapel carved into the ice at the Argentine Base of Belgrano II (WAP ARG-Ø6) in Antarctica!

HOUGHTON, Mich. – On Saturday afternoon, at least 40 people gathered in a student-made ice chapel outside St. Albert The Great Parish on Michigan Tech’s campus. Every person was required to wear a mask during services.

«This is the 6th consecutive year ice masses were held with 200-250 total people attending overall». Father Ben Hasse says holding prayers in the outdoor venue is something special.

Hasse looks forward to having more people at ice mass during the next winter carnival and also hopes for new architectural additions to the chapel.

Thanks and credit to: https://www.uppermichiganssource.com/2021/02/07/michigan-tech-holds-annual-ice-mass-2/

Antarctica– The Chapel of  “Nuestra Señora de las Nieves” (Our Lady of the Snows) is the southernmost place of worship in the world, 800 miles from the South Pole. It serves as a permanent Catholic church for those that reside on Belgrano II (WAP ARG-Ø6) throughout the year.  Although it’s located in Antarctica, it falls under the Roman Catholic Archdiocese of Bahía Blanca in Buenos Aires,   Argentina with Guillermo José Garlatti as their Archbishop. 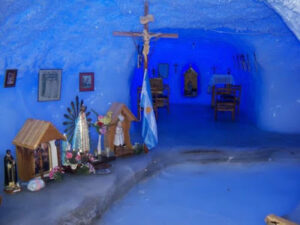 In 1959, the first Belgrano Base (WAP ARG-Ø5) was built by the Argentinians and included a chapel. However, the ice that the base was built on was unstable forcing them to relocate. Despite Antarctica being covered almost 98% by ice, they found ice-free land close to the original to construct a new base. Nearby the newly built Belgrano II  Base,  a system of tunnels and caves was dug out of ice that eventually included the new chapel that remains today in permanent ice. (see picture aside)

Argentina has four churches on the Icy Continent;.