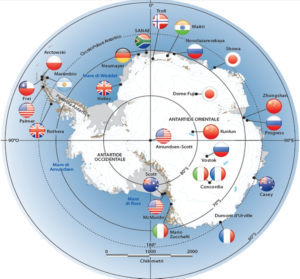 Antarctica is the highest, driest, coldest, and windiest continent on earth. So perhaps unsurprisingly, it spent the last 35 million years in relative isolation. People only discovered Antarctica in 1820, and it took another 100 years for people to reach the pole. But,  how many people live in Antarctica now?

Antarctica has no real permanent residents — just Research Stations and Field camps staffed either seasonally or year-round. Yet in the summer season, if the weather is favorable, Antarctica usually hosts up to 5,000 people. When the summer fades into winter, many stations get completely depopulated, and the ones with a permanent mission keep much smaller crews to keep the stations running. During the wintertime, Antarctica’s population goes down to around 1,000 people.

Currently, scientists, staff, and whoever else might happen to be in Antarctica stay in one of 70 even more  Bases (40 of which are year-round). Over 30 nationalities are usually represented on the continent.