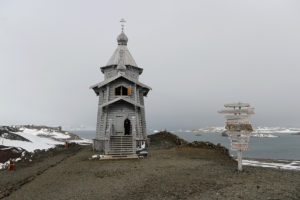 Members of the Antarctic Uruguayan ARTIGAS Base (WAP URY-Ø1), journalists and other guests visited the Trinity Church in Russia’s Bellinsghausen Polar Station (WAP RUS-Ø1) on King George Island, Antarctica, during the first week of December 2015. The priest explained to guest how the church was built as well as delivered a speech about the Orthodox and Christian churches in the twenty-first century. (see a video by cicking the gif aside) 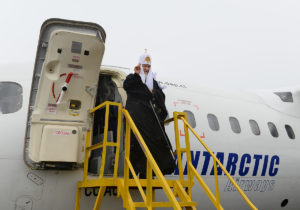 The head of the largest of the world’s Eastern Orthodox churches, Patriarch Kirill, has become the first Orthodox leader to visit Antarctica.

A week after meeting Pope Francis to smooth over centuries of tensions with the Roman Catholic Church, the Russian Orthodox Church’s Patriarch Kirill has reached out to another historically non-Orthodox congregation: penguins. 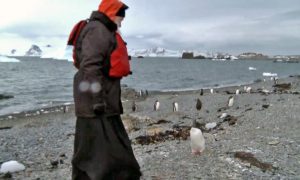 The Patriarch, who heads the largest of the world’s various eastern Orthodox churches, arrived at Russia’s Bellingshausen research station on King George Island, just off the coast of Antarctica, on Febr. 18, 2016.

(see a video by cicking the gif aside) 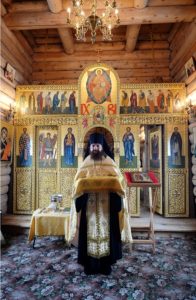 Patriarch Kirill of Moscow and all Russia prayed at the Trinity Church at the Russian Antarctic Station Bellingshausen on the island of Waterloo (aka King George Island). -You are here on the top of the planet … When I sanctified the water in Antarctica today, I thought about the whole globe below us, and prayed for God’s creation. Praying  in this temple for relatives and all  who works here in Antarctica, for their Countries and the whole world– said the Patriarch.

He took a walk with penguins on the island’s rocky shore before delivering a service for scientists at the Station’s Holy Trinity Church, the southernmost Russian Orthodox chapel on the planet.(see another video by cicking the gif aside)

In the last century, the Pontiffs have crossed the boundaries and the Oceans to bring the blessing of God to all peoples, but none have thought of going to Antarctica, a place at the end of the world as Pope Francis says to come from !  Perhaps this possibility could be a goal to him … if he wants it.

The blessing of a vast Earth larger  than Europe, occupied by hundreds of scientific Stations and thousands of people engaged in research, needs the blessing of a Church witnessing to those latitudes the love of God and of the Blessed Mother, His Most Holy Mother. 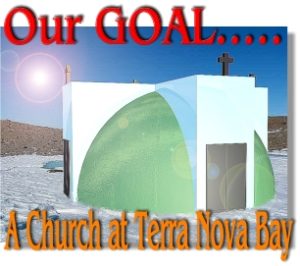 The above message has been delivered by WAP, 4 years ago,  to Pope Francis, after having sent the same one  to Pope Benedict XVI few years before. That was given among the  WAP proposal to build a Catholic Churh at the Italian Mario Zucchelli Station following the idea launched in the year 2004.

When does Italy break the fear and do something like that?