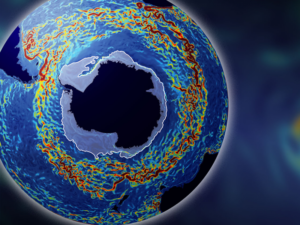 The Antarctic Circumpolar Current is the only ocean current to circle the planet and the largest wind-driven current on Earth. It’s also 30% more powerful than scientists realized.

An ocean circulation model shows the Antarctic Circumpolar Current swirling around Antarctica, with slow-moving water in blue and warmer colors indicating faster speeds (red represents speeds above 1 mile per hour). But how much water is really flowing through the current?
Recent fieldwork provides unexpected results.