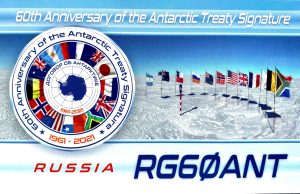 Volker Strecke DL8JDX has just received the Antartida Argentina Plaque and the RG6ØANT special QSL Card on the occasion of the 60th Anniversary of the Antarctic Treaty entering into force.
Volker (Ex-Callsigns: DM3LTG, Y43UG, Y24LN, Y88POL, DPØGF, DPØGVN) is happy to share this great achievement with the Antarctic hunters! 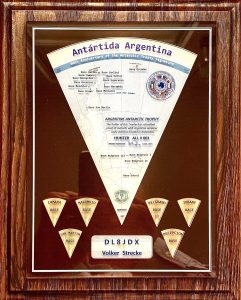 Argentine Antarctica is a part of Antarctica claimed by Argentina  as part of its national territory. This claim overlaps with British and Chilean claims in Antarctica.

Argentine Antarctica is a department of the Province of Tierra del Fuego, Antarctica and South Atlantic Islands.

The Argentine exploration to the continent started early in the 20th Century. José María Sobral was the first Argentine to set foot on Antarctica in 1901. He spent  two seasons with the Swedish Antarctic Expedition of Doctor Otto Nordenskiöld.

In 1904, the Orcadas Base was fully working. Years later other bases were made. The first Argentine expedition to reach the South Pole was the 1965 Operación 90.

Argentine actions in Antarctica are coordinated by the Instituto Antartico Argentino