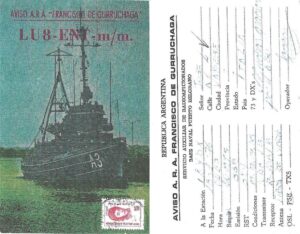 Thanks to Joe De Gasperin I2YDX a keen Dxer and Antarctic Chaser for submitting a rare and old QSL of the Polar ship ARA Francisco De Gurruchaga worked way back in jan 15th 1976. LU8ENT/MM is listed in WAP-WACA Directory under the Polar Ship section, therefore valid for WAP Awards.

A brief profile of this Polar ship:

In service since 1975, she worked in the tasks of  support to Antarctic campaigns, and rescue. In 1976 she set out from Ushuaia to the South Shtetland Islands to rescue the crew of the sinister M/V ARA Zapiola. That same year, Francisco de Gurruchaga supported the oceanographic vessel ARA El Austral and later the ARA Diaguita, both with a waterway. During the Malvinas War she operated from the Isla de los Estados, being the protagonist of the rescue of 390 men from the sinking of the ARA General Belgrano cruiser. In 1985 she captured the Japanese fishing vessels Fuki Maru 51 and Dae-Wang, opening fire on the former for disobedience. She repeated catches in 1986 with the Chidori Marú and Ainnia fishing vessels. In 1999 she was part of the first combined exercise with the United Kingdom after the Falklands War, called “Millenium” .

In 2010 she was assigned to Ushuaia as a new seat, from there she began new functions such as search and rescue, and resupply of Control Posts and Maritime Traffic around the Isla de los Estados. In a difficult mission, she rescued the shipwrecked from the Polish sailboat Nashachata, seriously damaged in Sloggett Bay, having to withstand winds of 100 km/h and waves of 6 meters high during the operation. In December 2011 she helped injured kayakers on the Isla de Los Estados, then in May 2013, the veteran ship was again assigned to the Puerto Belgrano Naval Base, where it received important maintenance tasks.