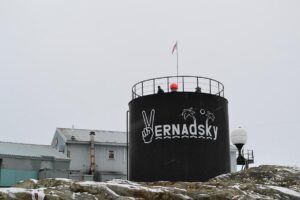 25 years ago, February 6th  1996, Ukraine took over the operation at Base Faraday (or Base F), WAP GBR-Ø7 of the United Kingdom which was sold by the UK for a symbolic one pound. The cost of disassembling the base with good environmental practices and standards would have been too costly.

The  National Antarctic Scientific Center of Ukraine did a great job to renew the Base which is one of the most active in Antarctica, Over there,   research programs are performed all year round in several fields:  of meteorology, upper atmospheric physics, geomagnetism, ozone, seismology, glaciology, ecology, biology and physiology .

Vernadsky Station (WAP UKR-Ø1) is located at the marine tip of Galindez Island in the group of Argentine islands of the Wilhelm Archipelago.

The base has a wonderful Orthodox Chapel inside, the St. Volodymyr Chapel (properly Grand Prince St. Vladimir, equal to the Apostles) a small Eastern church which serves the Vernadsky Research Base.

To celebrate the event,  a special callsign  EM25VER (WAP-312) has been issued and in addition, a special free digital certificate Award, “25th Anniversary of the Ukrainian Antarctic Station Akademik Vernadsky” will also be issued. It can be requested by sending an email to Pavlo Tarasovych UT1KY at ut1ky@ukr.net after having had at least one contact with EM25VER, which will be on air , all bands, all modes also during the Antarctic Activity Week.

QSL direct or via Bureau to UT1KY