Humans have left their mark on the once virgin continent, Antarctica. In the research bases we can find a number of services that many less isolated places do not have. School, Post office, Hospital, bowling alley or ATM are some of the services we can find in the Icy Continent,  and among all these buildings, Churches could not miss. 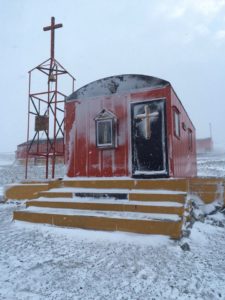 Christianity was first established in Antarctica by Captain Aeneas Mackintosh who erected a cross on Wind Vane Hill in 1916. The first religious service was conducted in Antarctica in 1947 by William Menster with about 2,000 people from different Christian denominations in attendance. Research and whaling stations were erected in the large area of Antarctica in the early 1900s. Since then, several scientists are attending the area especially during summer while a few people stay over during winter. The extended stay in the region can be stressful and challenging for researchers. The Jesuit geophysicists have contributed to the growth of religion in the continent through Antarctica mission work. The religion in Antarctica dates back to the discovery of the continent in 18th century. However, Christianity was the first religious practice in the continent.

Shortly,  WAP will start to publish history and picture of the Catholic Chapels that have been built in most of the  Argentine Research Stations in Antarctica, even if the articles previously published  on the old WAP website have been recovered by Floyd Larck KK3Q are already available through http://www.waponline.it/articles/church-archives/.