The coastal region of Terre Adelie was discovered and named by the French Dumont D’Urville expedition which landed on Debarquement Rock in the Dumoulin Islands at the northeast end of the Point Geologie Archipelago, on January 21, 1840. Terre Adelie was the subject of a territorial claim by France in 1924. This was further defined by a parliamentary decree in 1938 “to cover all islands and lands lying south of latitude 60°S between longitudes 136° and 142° east.” 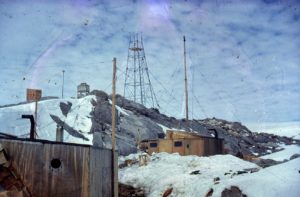 French Antarctic research station, Port Martin, 66° 49’ 06” South, 141° 24’ 02” East was established at Cape Margerie on the coast of Adelie Land, Antarctica, by the 3rd French expedition on January 20th  1950 and was occupied for two winters, during which time the coastal islands were explored and ground control astrofixes observed with astro-labes and theodolites. Inland traverses were made using Weasel vehicles and dog teams. During unloading for a third winter, the base was destroyed by fire on the night of January 23, 1952. Fortunately no one died or was injured. The Port Martin station (WAP FRA-Ø7) was abandoned and actually, in addition to being the site of an abandoned French research base with scattered artifacts, is the name of the adjacent anchorage. Port Martin is Antarctic Special protected Area (ASPA) No.166 and HSM 46.

Thanks and credit: Archive TAAF ( http://archives.taaf.fr/spip.php?article6871) 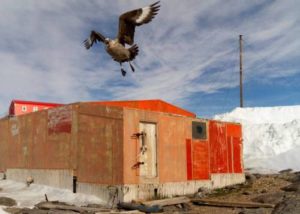 It’s worth to know that that, later in 1952, a small wooden hut was built on Ile des Petrels and occupied by seven men under Marret’s command; they overwintered in 1952/53 and enlarged the hut to serve as the new base site. That wooden building, known as ‘Base Marret’ (pictures aside) has been designated as HSM 47 (Historic site or Monument).

The movie in French language shows  Port Martin Antarctic Station  before the base was destroyed by fire in 1952 ,  is now 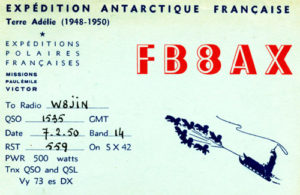 entirely available online. It is an excellent testimony of the daily life conditions in Antarctica in 1950s in which clearly appear FB8AX (René Gros from 7mns10s to 8mns 00s then Mario Marret from  9mns53 to 57s).

Petrel island is now the site of the new main French Station, named after Dumont D’Urville (WAP FRA-Ø1), subsequently built 62 km (39 mi) west of Port Martin and opened on January 12, 1956 to serve as the center for French scientific research during the Antarctic International Geophysical Year 1957-1958. The station has remained in active use ever since.