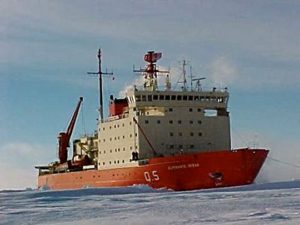 Argentina’s Navy icebreaker ARA Almirante Irizar is back on sea and next September will be ready to sail to Antarctica following almost ten years of recovery and refurbishing after she caught fire in 2007 when returning from Antarctica and was considered almost a wreck given the magnitude of the damages experienced.

According to Argentine defense reports the “new” Irizar has state of the art technology, has doubled its Antarctic Gas Oil (fuel) capacity and has increased six fold the area dedicated to labs and other scientific activities, as well as the cabins and beds for research staff.

The pre-accident Irizar was mainly involved in logistics and support for the Antarctic bases and stations, but the refurbished version is geared to scientific research. Likewise the icebreaker will be able to access the most austral of Argentine bases, Belgrano II, and the Argentine navy can again operate with helicopters.

All these years Argentina contracted mostly Russian icebreakers and helicopters to service and supply its bases.