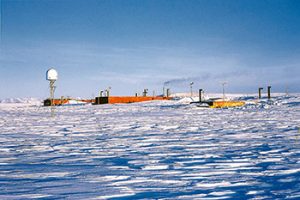 At present time Asuka Station is closed and covered under several meters of snow as well as the other Japanese Mizuho Station.

Asuka Station WAP JPN-Ø1 was operational from 1985 until 1991 to support field work in the Sør-Rondane Mountains. The Japanese Antarctic Research Expedition (JARE) made gravity measurements at many sites around Asuka Station based in the reference site using relative gravimeters more than 25 years ago. The determination of absolute gravity value at the reference site will bring accuracy improvement of the past gravity data. 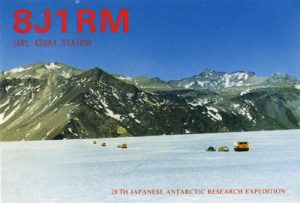 Asuka Station is listed among the “Most rare Bases”, last check 21 july 2020 by IK1GPG. See: http://www.waponline.it/wap-awards/wap-wada-most-rare-bases/

Some notes about the Japanese presence in Antarctica

In 1955, during the international conference Japan announced its participation in the Artarctic expedition. Participants agreed that in Antarctica, they must create a station that will provide information about the South Pole as a whole. There already were various foreign stations in Antarctica, but Japan had proposed to establish a base in the area, which was 1,600 kilometers away from the other stations. After that, the discussion continued, resulting in the decision to build the station “Showa or Syowa” (WAP JPN-Ø3) on the island of East Ongul. 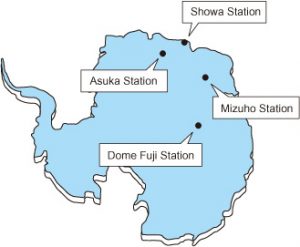 Ice is thick in this particular region, and therefore extremely difficult to access. In 2012, the latest research vessel “Siras” could not even come close to the shore. Since that time, Japan was the country that lost the war, some thought that it had the unfortunate fate. However, as a result, this place was favorable for study and research.

First, the base is located in a place where the Northern Lights may often be observed. In addition, a large amount of solar origin of meteorites was found near the Yamato Mountains, which are located 300 kilometers to the southwest of the base. The places, where ice that contain air masses over the last million years can be found, can be reached by snowmobile from the base of “Showa”. Later, other  Stations were built  in Antarctica: “Dome Fuji” (WAP JPN-Ø4) establisjed on January 29, 1957, “Mizuho” (WAP JPN-Ø2) established in July, 1970 on  Mizuho Plateau, 270 km south-east of Syowa Station,and  “Asuka” (WAP JPN-Ø1) established in March, 1985.