A brief history: The Republic of Belarus joined the Antarctic Treaty in 2006 and, in that same year, approved the National program for Polar research which is called “Monitoring of Earth’s Polar areas” ensuring activity of the Arctic and Antarctic expeditions for 2007­­-­2010 and for the period until 2015. Soon after, in 2008, it ratified the Environmental Protocol.

In 2015, the National Antarctic Program of the Republic of Belarus was accepted as the  30th  Member of COMNAP and  Belarus did receive a residence permit in the Antarctic.

According to the head  of the Belarusian Antarctic Expedition Alexey Gaydashov, research vessel Akademik Fedorov approached the icy continent at the end of December 2016.

On December 27-29th, 2016 personnel, material support and structures of the Belarusian Antarctic Station were successfully delivered by air transport from the ship to the location of the Belarusian expedition at Mount Vechernyaya, Enderby Land, East Antarctica. At the end of  January 2016, the first portion of the national research station, a three-section module for control, communication and navigation, was assembled in Antarctica at a geographic position of 67°39” South, 46°09’ East. 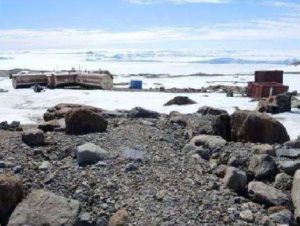 The main principles of activity of the Republic of Belarus in Antarctica are a system approach to the creation of the national Antarctic infrastructure and the organization of research, orientation of works for integration to international research programs, development of international cooperation in order to strengthen the Antarctic Treaty System, as well as development, consideration and recommendation to their Government of actions assisting in realization of principles and objects of the Antarctic Treaty.

On last  January  6th 2017, Belarusian polar explorers have assembled part of the second structure of the Belarusian Antarctic Station. The works are not completed yet, but now , Belorussians intend to erect a chapel at Vechernyaya Station, as they plan to open their B ase in Antarctica by this year.