Buromskiy, 66°  32’South, 93° 0’ East is a small island lying 0.6 km (0.37 mi) south of Haswell Island in the Haswell Islands group in Antarctica. About 1.2 km long and 0.9 km wide, it was discovered and mapped by the Australasian Antarctic Expedition under Douglas Mawson (1911–14). It was photographed by the Soviet expedition of 1958 and named for N.I. Buromskiy, expedition hydrographer who lost his life in the Antarctic in 1957. It lies 2.7 km north of Marbus Point, the site of Russia’s Mirny Station. 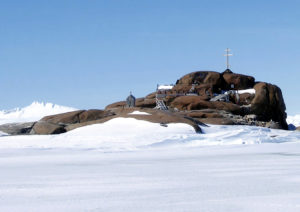 Buromskiy Island holds a Cemetery for several citizens of the Soviet Union, Czechoslovakia, German Democratic Republic and Switzerland who died in the performance of their duties while serving as members of Soviet and Russian Antarctic expeditions. It has been designated a Historic Site or Monument (HSM 9) following a proposal by Russia to the Antarctic Treaty Consultative Meeting

The site includes Ivan Khmara’s Stone, with an inscribed plaque commemorates Ivan Khmara, a driver-mechanic with the first Soviet Antarctic Expedition, who died while performing his duties on fast ice on 21 January 1956. The stone was originally erected at nearby Mabus Point, but was moved to Buromskiy Island in 1974 because of construction activity at Mirny. Ivan Khmara’s Stone has been designated a Historic Site or Monument (HSM 7) following a proposal by Russia to the Antarctic Treaty Consultative Meeting.

The Haswell Islands are a group of rocky coastal islands lying off Marbus Point, Antarctica, and extending about 3 kilometres (1.5 nmi) seaward. Douglas Mawson did apply the name “Rookery Islands” because of a large emperor penguin rookery on Haswell Island, the largest and seaward island in the group. In 1955 the Antarctic Names Committee of Australia proposed that the name Haswell be extended to the entire Group. Read more at: http://www.wikiwand.com/en/Religion_in_Antarctica

66° 32’South, 93° 0’ East , North of Marbus Point, Haswell Islands will be add to WAP-WADA Directory as WAP RUS-NEW. As soon as some Hams, maybe from Mirny Base will operate from there, a reference number will be given.