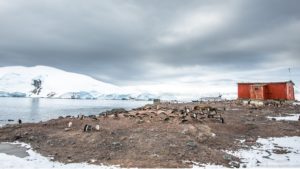 Refuge Caillet-Bois (WAP ARG-NEW) is an Argentine refuge in Antarctica located on D’Hainaut Island (63º54´00″ South , 60º47´00″ West). The refuge was inaugurated by the Argentine Navy on December 10th  1954. Originally it took the name of Refuge Port Mikkelsen referred to the name of the Danish arctic explorer Ejnar Mikkelsen. The refuge with its current name, which pays tribute to the Argentine naval Captain and historian Teodoro Caillet Bois, 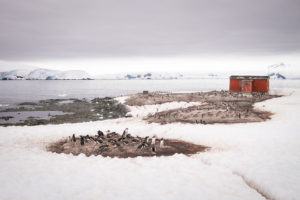 The ARA Petty Officer Castillo visited the shelter in early 2000 during the Antarctic campaign of 1999-2000 and the ARA Almirante Irizar inspected the refuge in April of the same year. The refuge was renovated in March 2017 by the personnel of the transport ARA Bahia San Blas 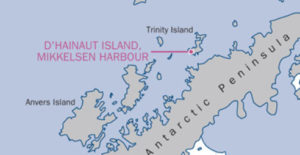 D’Hainaut Island is a small island largely flat, rocky island (less than 1 sq km), lying in Mikkelsen Harbour, a 3km wide bay, lined with ice cliffs, indenting the south side of Trinity Island between Skottsberg and Borge Point. The island is often snow covered until late in the season and there are a number of shallow reefs in the waters surrounding the island.

A report from Mehdi F5PFP says:
Yes we anchored at Mikkelsen Harbour and I remember very well of Caillet Bois refuge on its islet. At Mikkelsen harbor apparently remain the ruins of an old whaling station/depot but I didn’t see them. Mehdi F5PFP did operate as VP8DLM (on 16 march 2011) from a neighboring but different bay of Trinity island, more or less 3km from Mikkelsen harbor according to the map he just read.
TNX Mehdi, F5PFP

A reference number will be given as soon as someone will put Caillet-Bois Refuge  on the air … the game is open!