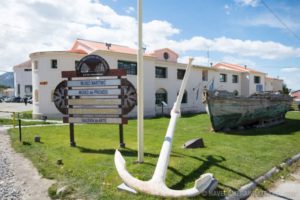 Ushuaia has grown by the sea but also under the watchful gaze of the prison. Both the Maritime, Antarctica and the Prison Museums bear witness to the passing of time in this southern land. While one tells the great adventures of seafarers, the other narrates the lives of those condemned to reclusion.

Facing the bay, within the Argentinian Navy venue, the building housing the Navy Museum was once the Recidivist Prison. Granted National Historical Monument by Congress in 1997, it bears witness to the origins of Ushuaia City.

At present, Marine and Antarctic Museum is directed by Dr. Carlos Pedro Vairo  of a  non-profit civil association with support from the local authorities and the Navy. It opens its doors to visitors who wish to know more about the history of the city.

A brochure with the location of the different rooms is handed out at the entrance. Guided visits are highly recommended and, while waiting for them to begin, visitors can walk through the first rooms devoted to the naval past of Tierra del Fuego. Just like the other southern islands, its development is closely tied to the sea, the only means of communication to the continent until 1948.

Created in 1994, the Museum has revalued the building of the former Presidio of Ushuaia. It began as a Maritime Museum, exhibiting a complete collection of naval models. It also houses an interesting collection on Antarctic Expeditions. It was declared National Historical Monument in April 1997. It was a good way to understand the early history of Ushuaia: the maritime history is very informative, particularly the Antarctic history; the penal colony and conditions of prisoners and the important native history of Tierra del Fuego and this is very well captured in the Yamana native exhibits. 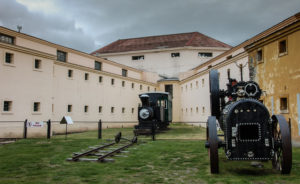 The old prison itself is very well kept and is formatted in a very interesting way. Each cell containing a separate piece of history. Once stepping into the cell,  the information begins. One can feel the hardship that the prisoners experienced in that cold place. The maritime exhibits are excellent as are the postal exhibits. The Antarctic exhibits are particularly gripping,  bringing the rescue missions back to life.