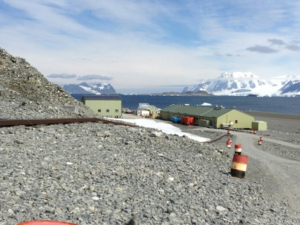 The lab is named after the sixteenth-century Dutch merchant, Dirck Gerritsz, who is said to to be probably one of the discoverer of Antarctica.

The Netherlands is a signatory to the Antarctic Treaty and has observer status on the Arctic Council. As a participant, the country undertakes to invest in research at the poles. This is the reason behind the Netherlands’ Polar Research Program. 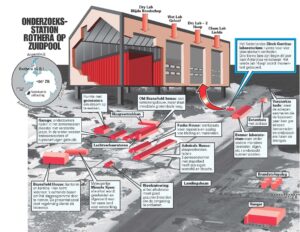 NWO and the Royal Netherlands Institute for Sea Research (NIOZ) developed a design for a laboratory in conjunction with BAS. An arrangement with four separate laboratories made from sea containers placed in a ‘docking station’ was chosen. It supplies the labs with electricity, Internet and water and protects them from the severe weather conditions. BAS built the docking station and NIOZ built the mobile laboratories, each with funding from the Netherlands Polar Program (NPP). Main science disciplines studied at Dirck Gerritsz Laboratory are:

The history tells about five ships set off for South America in 1598 to look for a trading route to Asia. One of these ships, called the ‘Blijde Boodschap‘ (or Annunciation) was blown south. There, Captain Dirck Gerritsz saw “high mountainous country”  that reminded him of Norway. This is cautiously assumed to be the Southern Shetland Islands, which would make him the first person to describe Antarctica. The entire Dutch laboratory is named after this Dutch merchant and explorer. The four mobile laboratories are named after four of the five ships: Blijde Boodschap (Annunciation), Liefde (Love),  Geloof (Faith) and Hoop (Hope). The name of the fifth ship was  Trouw (Loyalty).