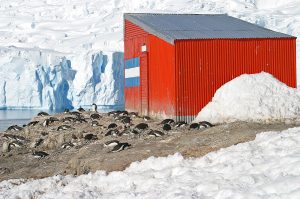 Captain Fliess Refuge (64°50’41” South, 62°31’48” West) is an Argentine Refuge in Antarctica located in Neko Harbour in the Andvord Bay on the Danco Coast, on western side of the Antarctic Peninsula. The refuge was opened on April 4, 1949 and it is managed by the Argentine Navy.

It was inaugurated together with the Penguin Observatory and the Rescue Station under the name of Refugio Neko. His name pays tribute to the Lieutenant of the ship Felipe Fleiss of the Corvette Uruguay who rescued the Swedish Antarctic Expedition headed by the polar explorer  Otto Nordenskjold (1901-1904). 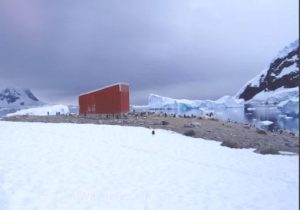 It has been enabled and supplied by the icebreaker ARA Almirante Irizar and the ship ARA Bahía Aguirre in various Antarctic campaigns.

Maintenance, repair and conservation of facilities were carried out to be used as support for scientific research.
WAP has no evidence of any Ham radio activity from Captain Fliess Refuge, therefore this site remain unnumbered.