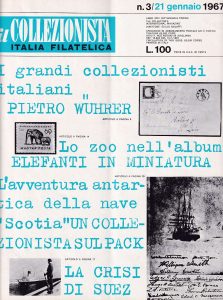 An old copy of “Il Collezionista”  an Italian  Philatelic Magazine  (Jan. 1967) reports a bit of story of the famous  Ship Scotia  which was depicted on a stamp issued by the  Falkland Islands,  Scotia was also depicted on two stamps issued by the British Antarctic Territory.

Scotia was a barque ( built in 1872 as the Norwegian whaler Hekla). She was purchased in 1902 by William Speirs Bruce, a natural scientist and 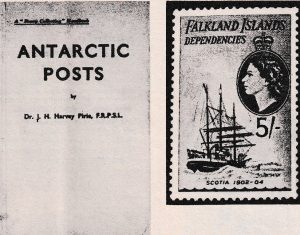 former medical student from University of Edinburg who organised and led  the Scottish National Antarctic Expedition (SNAE) from 1902 to1904 on board of Scotia which  was refitted as a research vessel for that specific use.

Scotia sailed on 2 November 1902 for the Antarctic. She arrived at the Falkland islands on 6 January 1903,  She then sailed to Laurie island, South Orkneys where she arrived on 25 March. 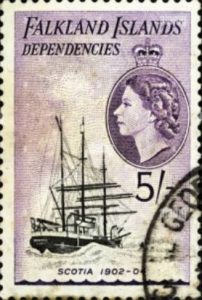 Scotia overwintered in Scotia Bay where she was frozen in for eight months. She departed for the Falkland Islands on 27 November en route for Buenos Aires, Argentina where she underwent a refit. Scotia returned to Laurie Island on 14 February 1904, sailing eight days later for the Weddel Sea. She departed from the Antarctic on 21 March. Calling at Saint Helena in June, she arrived at Millport, Cumbrae, Ayrishire on 21 July, and was escorted by a number of ships to her final destination of  Gourock Renfrewshire.

After the expedition, Scotia served as a sealer, patrol vessel and collier, she was destroyed by fire in January 1916.