WikipediA , the free Encyclopedia says: The majority of Catholic Antarctic sites exist due to the Argentine and Chilean presence on the Continent. The Worldwide Antarctic Program proposes building a Catholic chapel at MZS, Terra Nova Bay, Anta 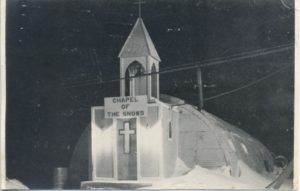 Catholic chapel (named after Saint Francis of Assisi) was built in 1976 at the Argentine Esperanza Base. The southernmost Christian chapel (in fact, the southernmost place of worship of any religion) lies at the Argentine Belgrano II Base at Coats Land. It is a permanent Catholic chapel made entirely of ice.  (see https://en.wikipedia.org/wiki/Religion_in_Antarctica) Once again WAP is proud to be quoted on WikipediA!

The white Chapel of the Snows, a 64-seat house of worship with a pretty, penguin-motif stained-glass window and an organ, is the third Chapel raised at McMurdo Station in Antarctica (the first two were destroyed by fire). The Erebus Chalice, which first traveled to Antarctica with Ross in 1841, m 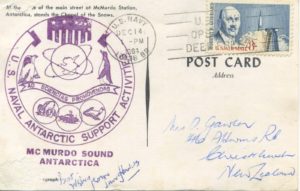 ay be the oldest Antarctic relic on the continent.

Now, thanks to Francois F8DVD who found and Old postcard (dated 1964)  and shared it; the front side of that card (pic above), shows the original chapel as it was at the time.

A year later November, 1965 articles on Antarctic journal  document the history of this structure. The church has been replaced after the 1978 fire that destroyed it. Read more of the history of this church at: https://www.southpolestation.com/trivia/history/chapel.html