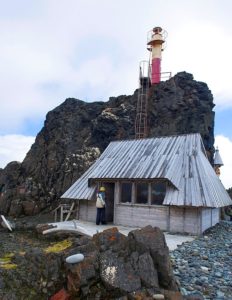 Continuing our studies on the peculiarities,  or simply the curiosities enclosed in the perimeters of the Antarctic Research Bases , we came across a wooden building near the lighthouse of Arctowski  Station (Pic aside).

The Polish Station in Antarctica has a lighthouse on the rock at Shag Point (62°09′28″ South,  58°27′56″ West) that provides navigational aid in Admiralty Bay. Its construction started in December 1977 and the lighthouse was operational on March 16th, 1978.

Recently, when browsing the web, we discovered very close the Rock that surmounts the lighthouse,  a wood building. What is that, we asked?

We put a question to our great friend Sebastien Gleich  SQ1SGB, who kindly explains the story that now,  we are happy to share:

Seba wrote: – Although it may seems a chapel, that house  wa 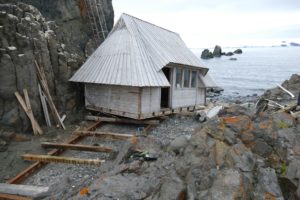 s a “Turist house”! Upon being established, its location was barely a dozen meters from the sea. Now, during high tide, it is less than a meter away. That little house,  was build in 1998 from wood waste after the general rebuild of the Station. The main builders was Zubek brothers and  Suszczewski, originator and chief builder of Arctowski.
We experienced that, the sea rises about  1meter shore per year…. 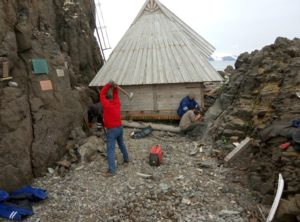 During the 2016 Antarctic campaign,   storm waves touched the house. Warsaw (Command Center) decided to demolish the house!
That year, it was one of the tasks in my expedition. I and couple friends took on the work to move it near the Station, so to rescue it from demolish. We did rise the complete building on round pieces of wood, then we slid them on huge sleigh, after having destroyed a couple of rocks by hammer because the  road was too narrow (photo here in the Left). We did relocate the little house near the main station buildings (photo below to the Right).

This operation lasted for a week … but we saved it!

We have to be grateful to Seba SQ1SGB; thanks to him,  now we know  little more about that building that looked like a Chapel!