A post from Stefania Dimofte  on FB, bring us to the oldest Church in Antarctica,  and more precisely,  in the Sub Antarctic South Georgia Island. 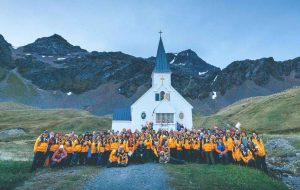 “The Whalers’ Church” is a typical Norwegian timber church. It was commissioned, and largely financed, by Carl Anton Larsen and designed by his son inlaw , architect. The Church was prefabricated in Strømmen, Norway, and erected by the Station workers in their spare time. The two bells in the steeple rung out on 1913’ Christmas Eve. On the following day, Solveig Jacobsen, granddaughter of CA Larsen, was baptised by the pastor Kristen Løken.

December 2013 did mark the centenary of the opening of the Whalers’ Church at Grytviken Station (WAP GBR-29). A special commemorative service took place on Christmas Day 2013, with a congregation including members of Oyas 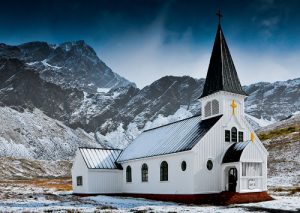 Venner (Norway’s Friends of South Georgia) who arrived on the cruise ship Fram as part of a voyage to celebrate the Church’s anniversary.

On Dec. 26 2020, Stefania wrote: «Christmas in Whalers Church in Grytviken, South Georgia, the oldest church in Antarctica which was consecrated on Christmas Day 1913. As in old days we sang carols and we remembered those who once lived here. We remembered Sir Ernest Shackleton whose funeral took place here….»

Merry Christmas to all my friends who share the same love and interest for the White continent and its explorers!» ended up Stefania