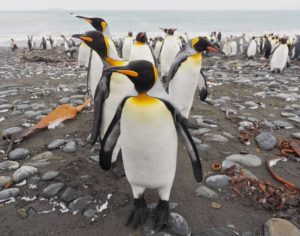 Satellite observations have found a raft of new Emperor penguin breeding sites in the Antarctic. The locations were identified from the way the birds’ poo, or guano, had stained large patches of sea-ice.
The discovery lifts the global Emperor population by 5-10%, to perhaps as many as 278,500 breeding pairs.
It’s a welcome development given that this iconic species is likely to come under severe pressure this century as the White Continent warms.

The Emperors’ whole life cycle is centered around the availability of sea-ice, and if this is diminished in the decades ahead – as the climate models project – then the animals’ numbers will be hit hard.
One forecast suggested the global population could crash by a half or more under certain conditions come 2100.

Thanks and credit to: https://www.bbc.com/news/science-environment-53549299