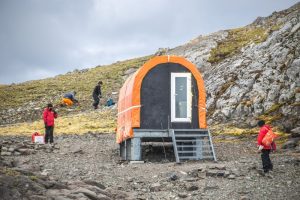 It was inaugurated at the 2006-2007 season and is administrated by the Instituto Antarctico Chileno (INACH).

It has capacity for six persons in summer, and it is used for scientific research. It has communications with HF and VHF radio, satellite telephony and the logistical support comes from the Professor Julio Escudero Base (WAP CHL-Ø7), by sea. 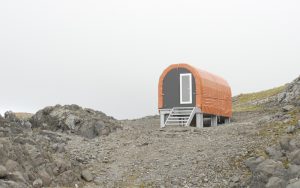 A 350 hp Yamaha ATV is also available. The Refuge (sometimes called Base) replaced one with the same name, built in 1969, given to the Uruguay Antartic Institute in 1984 and dismantled in 1989, located in where today is the Artigas Base from Uruguay.

Artigas (WAP URY-Ø1), located at 62° 11’South,  58° 51’West is a small year round Station widely spread over a mainly flat area above Collins Harbor towards the east of Maxwell Bay. The station was established in 1984 and is operated by the Instituto Antarctico Uruguayo (IAU), which is part of the Ministry of National Defense.